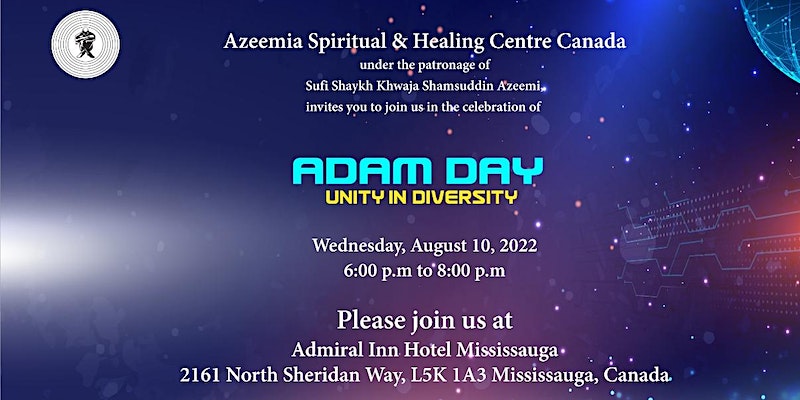 The Mission behind the Adam Day

Adam Day was started in Manchester back in 2003. Main purpose of Adam Day is to remind mankind that each human being whether he be a Hindu, Muslim, of Jewish faith, Christian or a follower of any other religion, a believer in God or a non-believer is an Adamite – a son or daughter of Adam and Eve.

The purpose of the Adam Day is to deliver the message that all children of Adam and Eve are brothers and sisters irrespective of their nationalities and geographical locations. And as such, we should all adhere to the belief in One God and follow the teachings of the heavenly scriptures; and we ought to work together to create a peaceful environment on earth for mankind to live in, not shower fire on fellow beings. If we are successful in this then we can expect God to shower his blessings upon us.

The Adam Day is the concept of Azeemia Sufi Order, which teaches us that being the descendants of Adam and Eve, we are all brothers and sisters. Our skin colours may be different, and we may belong to different religions & cultures but that need not make us hate and hurt each other. We all have the same inherent potential to know our own reality and through it develop true realization of God.

The human beings living in the 21st century have to face many difficult issues despite the great progress made in science and technology. In particular, terrorism, unrest, diseases, shortage of food, and environmental issues are a great concern. In many African and Asian countries, poverty is common. Hardships are encountered in spreading education. Due to food shortages, people are suffering from various problems. Diseases are spreading not only in the developing countries but are also spreading rapidly in America and Europe as well as other developed countries. These diseases include ailments of the heart, depression, cancer, and physiological issues in elders as well as the children. Environmental issues have not only caused problems in health and earning live but have also put the future of the land in danger. In regards to material aspects, mankind is worried and anxious and as a result, he has to encounter various spiritual and health issues.

Al human beings are the children of the one Father and Mother, Adam and Eve. In order to find solutions to depression, spiritual issues, and physical issues and to progress socially and spiritually, all of Adam’s children will have to work together. The basis of this effort should be respect for all human beings and love between individuals and nations. It is the resposibility of human beings to rectify the situation on Earth and sustain peace everywhere.

The creation of each human being came about through love. Love is the excellence of human beings. The power of love can bring salvation and prosperity for all of mankind as well as the rest of God’s creation.

Mankind reaches its utmost heights only through the excellence of love. And if one does not possess this one excellence then all other excellences are harmful.

The Adam Day takes place annually in London & Manchester (UK), Mississauga (Canada) & New York, and San Francisco (USA). Dignitaries from the local community participate and share the vision of diversity and inclusiveness. Look forward to seeing you in this event in Mississauga Canada.

Capacity is limited, so it’s a first come first get basis.