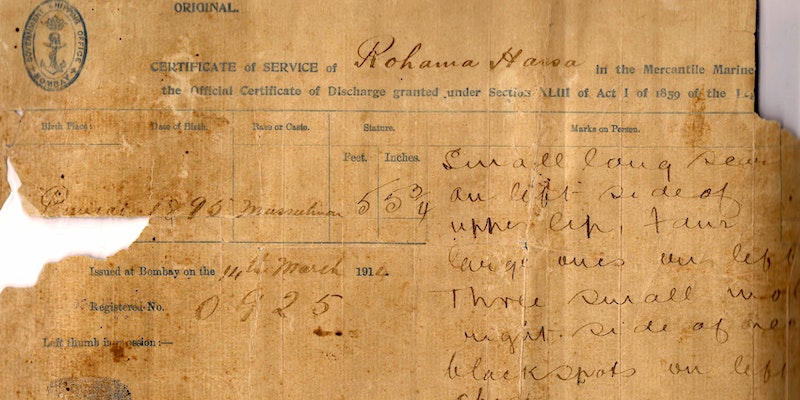 Bengali Seafarers in the Archives and Beyond: How researching the seafaring life of my grandfather led to sources about Bengali seafarers.

Since discovering some letters and certificates in a box in Pakistan exactly a decade ago, Asif Shakoor has been researching his grandfather’s life in the British Merchant Navy during the First World War. Whilst tracking down crew lists and photographs relating to his grandfather in the Archives and online sites, Asif has come across fascinating sources about Bengali seafarers. In this session, Georgie Wemyss will interview Asif about his findings, knowledge and advice about tracking down the family histories of Bengali seafarers employed by the British Merchant Navy.

Interview and discussion with Georgie Wemyss about Asif and Abdus’ findings, knowledge and advice about tracking down the family histories of Bengali seafarers employed by the British Merchant Navy.

Asif Shakoor is an independent scholar. He grew up in Manor Park and studied at the University of East London. His grandfather, Mahomed Gama, enlisted in the Mercantile Marine during the Great War. He has presented research at national conferences and local events.

Abdus Saleh is 3rd generation Bengali, who came and settled in the UK when he was 10 years old. A qualified banker by profession, passionate about his roots as a Bangladeshi. Conducts personal research about the rich heritage of Bengalis and their contribution to the world in general i.e. the contribution Indian seafarers made to make Great Britain ‘great’, contribution in arts and literature especially the works of Tagore.

Georgie Wemyss is Co-director of the Centre for Research on Migration, Refugees and Belonging at the University of East London. She has a long-standing research interest in invisible histories of empire, South Asian seafarers and British citizenship and belonging.