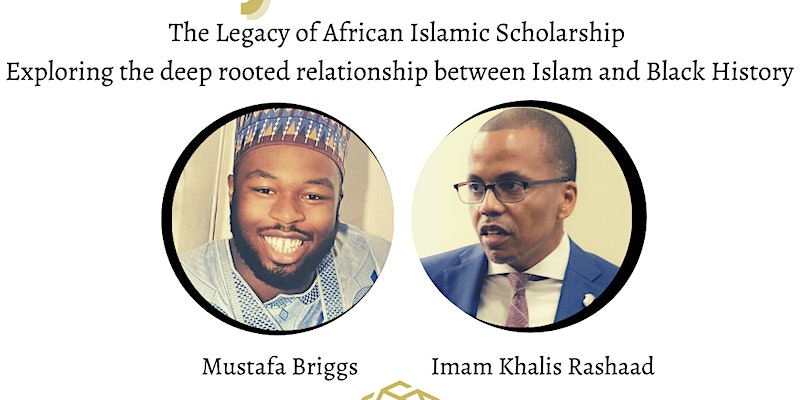 Description:
Exploring the deep-rooted relationship between Islam and the Legacy of African Islamic Scholarship.

Join us on Friday, February 18th at 7Pm as we celebrate 10 years of love and service and Black History Month with a conversation with Mustafa Briggs and Imam Khalis.

We will be exploring the deep-rooted relationship between Islam and the Legacy of African Islamic Scholarship with the book launch, Beyond Bilal: Black History in Islam written by Mustafa Briggs.

“After a widely successful tour across the globe Beyond Bilal: Black History in Islam finds its way to your bookshelf. Beyond Bilal: Black History in Islam is the breakthrough and pioneering lecture by writer, lecturer, and educator Mustafa Briggs. Beyond Bilal explores and uncovers the deep-rooted relationship between Islam and Black History, from Black Prophets and prominent figures in the Qur’an to the unknown black Sahaba and scholars of the early generations, the history of Islam in Africa, and the legacy of contemporary African Islamic scholarship and its role in the International Relations of the Muslim World. This book also contains Mustafa Briggs’s other two lectures, Before Malcolm X: History of Islam in the Americas, and Daughters of Fatima: Female Scholarship in the Islamic Tradition. From Oxford to Cambridge, Harvard to Yale, and now to you in book format for the very first time.”

Mustafa Briggs is a graduate of Arabic and International Relations from the University of Westminster whose dissertation focused on Arabic Literature and Literacy in West Africa. Mustafa started an MA in Translation at SOAS, the University of London with a specialization in Arabic and Islamic Texts, before going onto al-Azhar University in Cairo, Egypt where he is currently doing another degree in Islamic Studies and Arabic.

Mustafa rose to international acclaim for his ‘Beyond Bilal: Black History in Islam’ lecture series which saw him explore and uncover the deep-rooted relationship between Islam and Black History; and the legacy of contemporary African Islamic Scholarship and its role in the International Relations of the Muslim World as well as the vital role Female Scholarship plays in the West African Islamic Tradition, which he presented at over 30 Universities across 3 continents, including Oxford, Cambridge, Harvard, and Yale.

Mustafa has also been featured on international media such as AlJazeera and Islam Channel to discuss themes such as Islamic History and Blackness and Islam and is currently working on forthcoming translations of Traditional West African Islamic Texts.