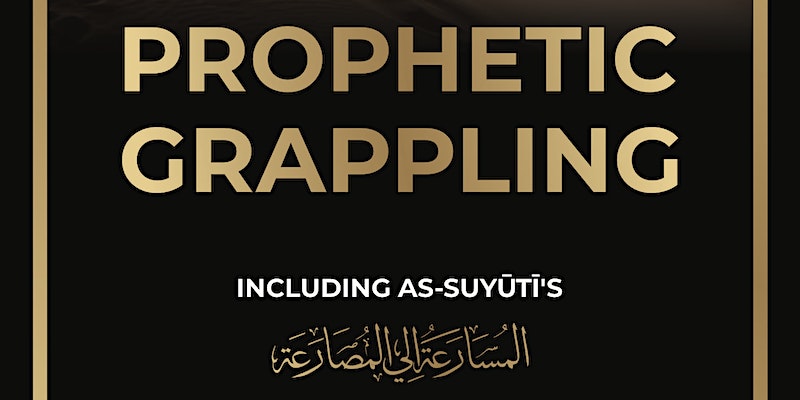 Description:
Registrations Are Closed
Sales for this event have ended. For more details on the book, visit https://beaconbooks.net/
Join us for a book launch event introducing “Prophetic Grappling”, published by Beacon Books.

Join us for the launch of “Prophetic Grappling – including as-Suyuti’s al-Musārʿah ila al-Muṣārʿah ‘ Swiftly to Wrestling'” – published by Beacon Books.

Limited spaces available – COVID19 guidance MUST be adhered to, face masks must be worn (if exempt, be sure to display exemption lanyard/ badge).

Sport has been a hallmark of every culture throughout history, and Islamic civilization was no exception. At the time of the Messenger of God ﷺ, noble arts such as Archery, Swordsmanship, Equitation, and Wrestling were the established sports of the day. But how were these sports practiced and what purpose did they serve? What emphasis does Islam place on martial arts?

Drawing on hadith literature and classical texts, this short work looks at the art of wrestling as practiced by early Muslims, including:

– A brief history of wrestling in Arabia and amongst the Companions– A translation and commentary on the short treatise by the great 9th century Imam Jalaluddin as-Suyuti’s al-Musārʿah ila al-Muṣārʿah (‘Swiftly to Wrestling’).

– A discussion on the objectives of sports in Islam with excerpts from Silat al-Riyādati bil-Dīn wa-Dawruha (‘The Relation Between Exercise and Religion’) by the late Shaykh Muhammad ibn Alawi al-Māliki (1944-2004).

In a time when the sport is heavily commercialized, Prophetic Grappling hopes to inspire a new generation to turn to the noble example of the Messenger of God ﷺ and use traditional martial arts as a means of spiritual, as well as physical, growth.

Join us for an evening of talks relating to Prophetic arts and their centrality in Muslim life, along with discussions on their physical and spiritual importance.

“Spirituality through Sports – Closeness through Combat”

“Rights of the Body – Importance of Balance in Islam”

The evening will host a short grappling demonstration by members of Osswa Jiu-jitsu Carlson Gracie 302 and a brief Q&A with the author, Nisar Shaikh.

Exclusive paperback copies of “Prophetic Grappling” will be available for purchase at a special launch price of £10 (RRP £12.95).

Brothers & Sisters are welcome, with segregated seating in the auditorium.

Limited creche facility will be available (Ages 3-9 yrs) at a nominal cost of £3 per child (to be paid upon entry).