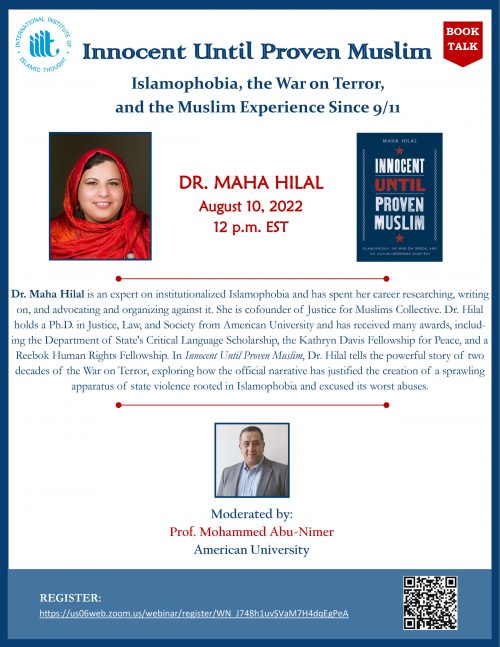 On September 11, 2001, nineteen terrorists hijacked four airplanes and carried out attacks on the United States, killing more than three thousand Americans and sending the country reeling.

Three days after the attacks, President George W. Bush declared, “This is a day when all Americans from every walk of life unite in our resolve for justice and peace.” Yet in the days following, Bush declared a “War on Terror,” which would result in years of Muslims being targeted on the basis of collective punishment and scapegoating.

In 2009, President Barack Obama said, “America must play its role in ushering in a new era of peace.” Instead, Obama perpetuated the War on Terror’s infrastructure that Bush had put in place, rendering his words entirely empty. President Donald Trump’s overtly Islamophobic rhetoric added fuel to the fire, stoking public fears to justify the continuation of the War his predecessors had committed to.

In Innocent Until Proven Muslim, scholar and organizer Dr.Maha Hilal tells the powerful story of two decades of the War on Terror, exploring how the official narrative has justified the creation of a sprawling apparatus of state violence rooted in Islamophobia and excused its worst abuses. Hilal offers not only an overview of the many iterations of the War on Terror in law and policy, but also examines how Muslim Americans have internalized oppression, how some influential Muslim Americans have perpetuated collective responsibility, and how the lived experiences of Muslim Americans reflect what it means to live as part of a “suspect” community. Along the way, this marginalized community gives voice to lessons that we can all learn from their experiences, and to what it would take to create a better future.

Twenty years after the tragic events of 9/11, we must look at its full legacy in order to move toward a United States that is truly inclusive and unified.

Dr. Maha Hilal is an expert on institutionalized Islamophobia and has spent her career researching, writing on, advocating, and organizing against it. She is cofounder of Justice for Muslims Collective. Dr. Hilal holds a PhD in Justice, Law, and Society from American University and has received many awards, including the Department of State’s Critical Language Scholarship, the Kathryn Davis Fellowship for Peace, and a Reebok Human Rights Fellowship. Her writings have been published in Al Jazeera, The Daily Beast, Vox, and US News, among others.

Mohammed Abu-Nimer, of the International Peace and Conflict Resolution program, is a full professor at American University in Washington, D.C., who has conducted interreligious conflict resolution training and interfaith dialogue workshops in conflict areas around the world, includnig Egypt, Northern Ireland, the Philippines (Mindanao), Israel, Palestine, Chad, Nigeria, and Sri Lanka. As a professor with over 35 years of teaching experience, he has developed numerous courses that deal with different facets of peacebuilding and conflict resolution and regularly publishes on the subject. While his research has focused on a wide array of areas in peacebuilding and conflict resolution, his most recent areas of focus have included faith-based peacebuilding, interfaith dialogue in peacebuilding, and building social cohesion, along with pedagogical considerations on incorporating peace and forgiveness education in the Arab world and Muslim world. He also served as a Senior Advisor to the KAICIID Dialogue Centre, an international organization that specialized in interreligious and intercultural dialogue. Abu-Nimer has been both author and an editor of more than 13 books on faith-based and interfaith peacebuilding (e.g. Nonviolence and Peacebuilding in Islamic Context: Bridging Ideals and Reality (2003); Evaluating Interreligious Peacebuilding (2021); Peace-Building By, Between and Beyond Muslims and Evangelical Christians (2009)), as well as interfaith dialogue and its role in peacebuilding and reconciliation (e.g. Unity in Diversity: Interfaith Dialogue in the Middle East (2007)).  In addition, he has authored numerous articles in refereed journals, such as the International Review of Education, Journal of International and Comparative Education, Journal of Religious Ethics, Peace and Change: A Journal of Peace Research, and the International Journal of Politics, Culture, and Society. In addition to his articles and publications, Dr. Abu-Nimer is the co-founder and co-editor of the Journal of Peacebuilding and Development.