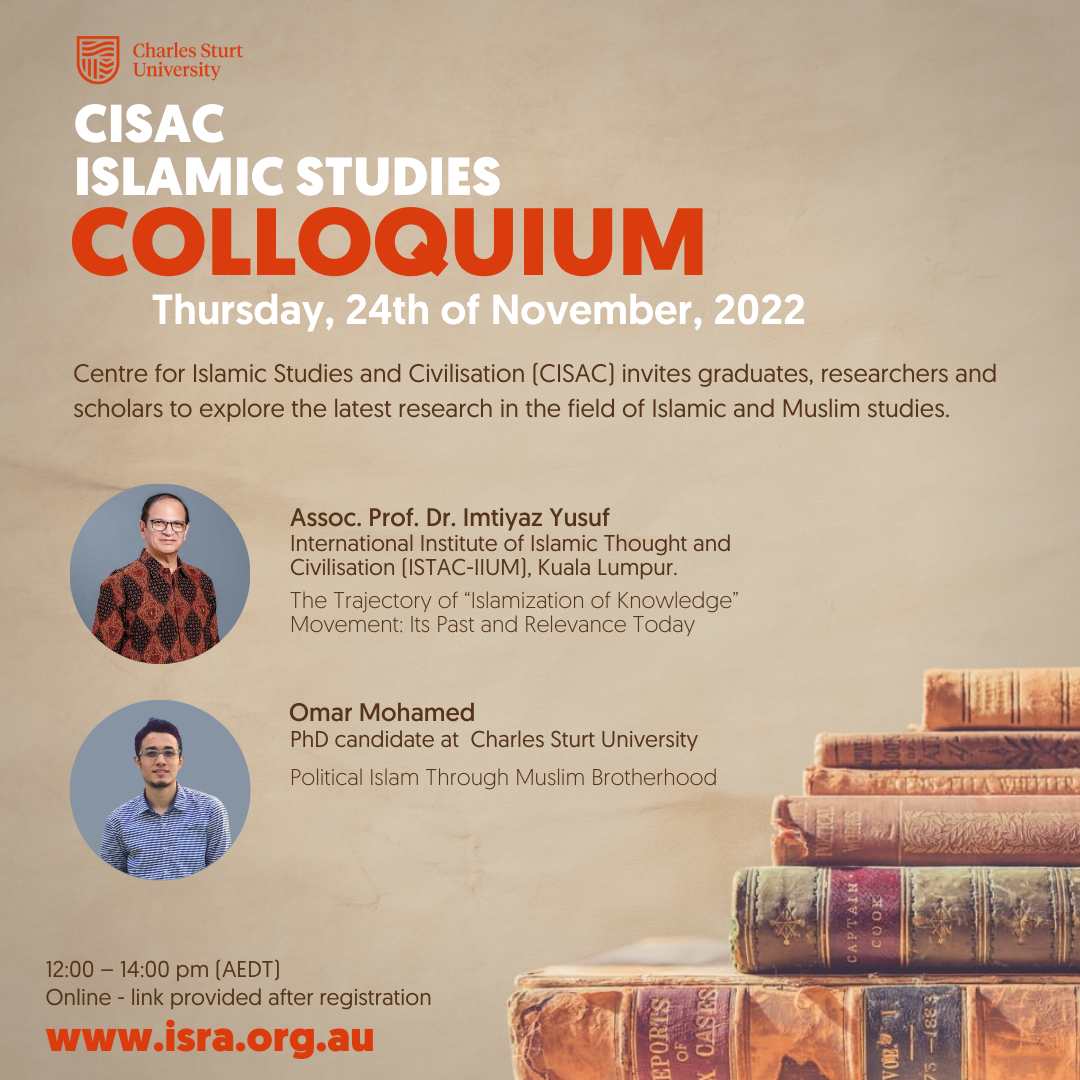 Assoc. Prof. Dr. Imtiyaz Yusuf will present at 12:00 – 12:45 pm (AEDT): The Trajectory of “Islamization of Knowledge” Movement: Its Past and Relevance Today

Zoom link will be provided upon registration.

The first presentation will be delivered by Assoc. Prof. Dr. Imtiyaz Yusuf on The Trajectory of “Islamization of Knowledge” Movement: Its Past and Relevance Today, from 12:00 – 12:45 pm (AEDT).

The Islamization of Knowledge educational movement was the brainchild of Professor Ismail al Faruqi and his colleagues as a response to address the education crisis facing the Muslim world in the aftermath of colonial impact on the state of knowledge in the Muslim world. It engaged in an intellectual and practical engagement with Modernity at the level of both epistemology and ontology. It offered a workplan for the alleviating educational crisis facing the Muslim Ummah through the revitalization and reconstruction of higher education in Muslim countries through curriculum reform and faculty development. Yet, over the decades the project of Islamization of Knowledge has undergone many changes due to internal and external factors. With the global expansion of the Muslim Ummah this presentation looks at the continued relevance and the need for the expansion of the core element of the Islamization of Knowledge project which is to master the disciplines.

The second presentation will be delivered by Omar Mohamed on Political Islam Through Muslim Brotherhood , from 13:00 – 13:45 pm (AEDT)

Omar Mohamed obtained a master’s degree in social sciences from Universiti Sains Malaysia 2019-2021. Currently, he is a PhD candidate at Centre for Islamic Studies and Civilisation, Charles Sturt University. Omar’s native language is Arabic, and has the ability to communicate in English, French, Thai and Malay. List of publications:

● Socialisation and Recruitment in Islamist Movements: A Comparison between the Muslim Brotherhood and Al-Qaeda

● Socialization in Extremist Movements: A Case Study of Al-Qaeda

● Media Socialisation-The Influence of Media that led to a Genocide: A Case of Rwanda and Egypt

● The Life of Egyptian Extremists: A Comparison between Mohamed Atta and Shukri Mostafa

● Why Youths Join the Terrorist Movements?

● The Life of Egyptian Extremists: A Comparison between Mohamed Atta and Shukri Mostafa

● Egypt Towards an Islamic State