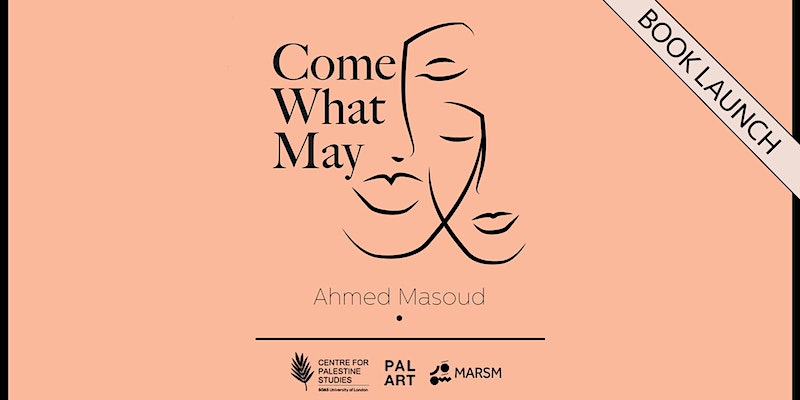 Launching his anticipated novel ‘Come What May’, Palestinian writer and director Ahmed Masoud discusses his latest work with author Selma Debbagh. In this event, Ahmed will read excerpts from the book and talk about contemporary Palestinian writing and art. Both Selma and Ahmed write about Palestine in English and have previously collaborated on various artistic projects. During this evening, they will discuss the main themes of the novel, looking at class issues in Gaza, corruption, and betrayal in the very small and isolated society. ‘Come What May’ is also a love story set against a background of literature, books, and Shakespeare.

You can pre-order your copy here.

How does one investigate a murder in the middle of a war zone? Does it matter if a person is killed by an airstrike or a knife?

‘Come What May’ is a poignant novel following the life of Zahra Beiso whose husband Ammar, was killed in 2014 and written off as one of the two thousand or so casualties of war. However, Zahra is convinced that her husband was murdered by a fellow Palestinian, not an Israeli airstrike. This conviction would put her on a two-year journey ripe with dismissal and ridicule as she tries desperately to find a detective willing to take on her case. When Nouman El Taweel agrees to investigate, Zahra begins to regret it almost immediately as the policeman uncovers the truth behind the murder, along with a network of deception, lies, and corruption.

This event is organized by the Centre for Palestine Studies (CPS) and supported by Marsm and PalArt.

Ahmed Masoud is the author of the acclaimed Novel Vanished – The Mysterious Disappearance of Mustafa Ouda. Growing up in Palestine and moving to the UK in 2002, Ahmed/Masoud’s has amassed a vast list/body of work of international theatre and radio pieces as well as founding Al Zaytouna Dance Theatre and more recently the PalArt Collective. In 2019, he worked with Maxine Peake on Obliterated, a theatrical experiment, and artistic protest – you can learn about it here. Ahmed’s Theatre and Radio Drama credits include: Application 39 (WDR Radio, Germany 2018) Camouflage (London 2017), The Shroud Maker (London 2015 – still touring), Walaa, Loyalty (London 2014, funded by the Arts Council England), Escape from Gaza (BBC Radio 4 2011).

Born in Scotland, Selma is a British Palestinian writer of fiction and a lawyer working at the International Centre of Justice for Palestinians (ICJP). Living in Saudi Arabia, Kuwait, Bahrain, France, Egypt, and the West Bank, her fictive work includes the novel, ‘Out of It’ (Bloomsbury, 2011) her BBC Radio 4 radio play ‘The Brick,’ which was nominated for the Imison Award. She has won various awards for her short stories and her non-fiction has appeared in the Guardian, GQ, the LRB, and other publications. She is the editor of ‘We Wrote In Symbols; Love and Lust by Arab Women Writers,’ (Saqi, 2021) and is on the judging panel for the Society of Authors’ McKitterick Award 2022.