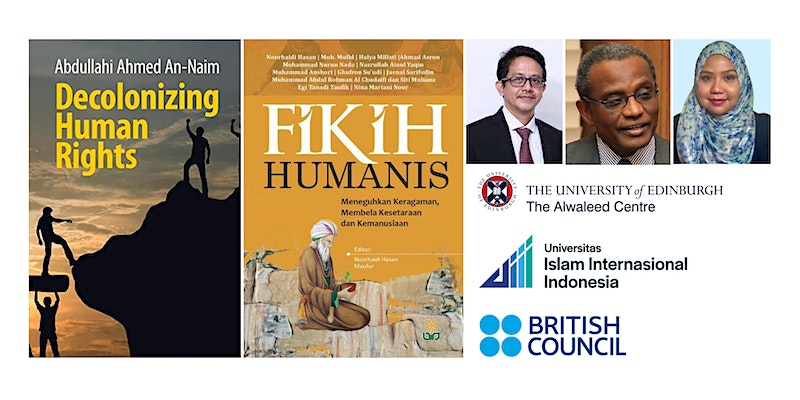 This event is supported by the British Council’s Going Global Partnership Programme and Co-Hosted by the Alwaleed Centre at the University of Edinburgh and the International Islamic University of Indonesia, Jakarta.

Prof. Abdullahi Ahmed An-Naim will discuss his recent book, Decolonizing Human Rights (2021), which criticises the liberal relativism of the universal human rights paradigm and the pretensions of legal enforcement of the current human rights regime. Proposing people-centred human rights protection, he argues that “the only possible way to protect any human rights norm is for that norm to be defined and practised by each society on its own terms.” Human rights are necessarily relative to the cultural and philosophical context in each specific setting, and thus must be identified and defended by the people concerned. This process will require cultural transformation and political mobilization, which includes inter alia a long-term provision of resources, education for officials and civilians, and so on.

Prof. Noorhaidi Hasan will discuss the lessons learned from his experience in coordinating a long-term human rights education programme for the Indonesian public and officials within the Office of Religious Affairs (KUA) since 2013. Using the Islamic jurisprudential (fiqh) approach, his team believe that the values and principles of religious diversity and human rights can be made more accessible, and thus better understood, by the public. Fiqh, if understood properly, may provide a normative framework for the behaviour and actions of Muslims, which essentially leads to the realization of maqāṣid al-sharī’a (the higher objectives and intents of Islamic Law). The basic essence of the maqāṣid is the protection and respect of human rights. KUA officials and functionaries were chosen as training subjects because they are important nodes between the Indonesian state and society. The officials directly influence the dynamics of the Indonesian Muslims’ daily lives. In this programme, the KUA officials are trained to learn the human rights discourse and contextualize it to help them in dealing with everyday issues such as religious conversion, underage marriage, interfaith marriage, polygamy, guardianship, and child custody.