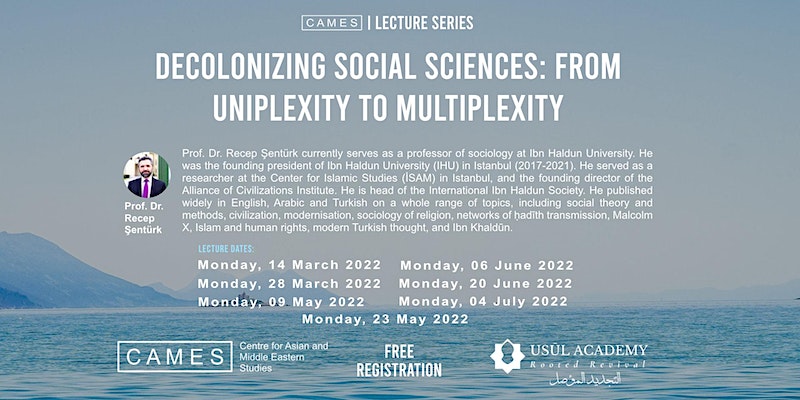 This lecture series attempts to understand social science and how to decolonize it in the context of Fiqh.

Social science, formerly referred to as sociology, along with anthropology, archaeology, and economics, is the discipline produced by Modernity. Modernity had a deep impact in the Islamicate as it reached to most of the Islamic countries through the colonial powers. Social science, therefore, was developed in the colonized lands with the Eurocentric views in mind replacing Fiqh which was the social science for Muslims.

Both Fiqh and social science are concerned with “human action” (‘amal). Social problems have been addressed and solved by fiqh in Muslim societies and by social sciences in Western societies. However, since the 19th Century there has been an intense struggle and mutual interaction between these two scientific traditions in Muslim societies. Western social science has conquered the domain of Fiqh and attempted to perform its functions. If we examine social change in Muslim societies during the last two centuries, we will realize that the westernization movement in those societies focused mainly on social institutions and relations. However, it does not seem possible to understand westernization by ignoring the mental and cultural basis on which social institutions and relations are built.

Understanding the points of differentiation between fiqh and social sciences and the functions of these two societal sciences cannot be realized without a comparison at the level of civilizations because fiqh is the product of the Islamic Civilization and social science is the product of the Western Civilization. As Ibn Khaldun states, science is one of the aspects of civilization, hence, one of the subjects of the discipline of ‘umran. Hence, in order to understand the changes in science we must first understand the changes in civilization, which they largely depend on.

There are two main rival theoretical imaginations and worldviews in understanding social science: “uniplex” and “multiplex”. Uniplex means a single layer while multiplex means multiple layers. Some theories assume that reality has only a single layer, either material or ideal. In contrast, some theories see this dichotomy between materialism and idealism as a false-dichotomy and view reality as multiplex, which includes both material and non-material levels.

This lecture series will try to understand the process of decolonization of social science from Fiqh and multiplex point of views.

Prof. Dr. Recep Şentürk currently serves as a professor of sociology at Ibn Haldun University. He was the founding president of Ibn Haldun University (IHU) in Istanbul (2017-2021). After graduating from School of Islamic Studies at Marmara University, he did his MA in Sociology at Istanbul University. He pursued his PhD in Sociology at Columbia University, New York. He served as a researcher at the Center for Islamic Studies (İSAM) in Istanbul, and the founding director of the Alliance of Civilizations Institute. He is head of the International Ibn Haldun Society. He published widely in English, Arabic and Turkish on a whole range of topics, including social theory and methods, civilization, modernisation, sociology of religion, networks of ḥadīth transmission, Malcolm X, Islam and human rights, modern Turkish thought, and Ibn Khaldūn. Among his books are in English, Narrative Social Structure: Hadith Transmission Network 610-1505, Malcolm X: The Struggle for Human Rights, and in Turkish; Open Civilization: Towards a Multi- Civilizational Society and World; Islam and Human Rights; Ibn Khaldun: Contemporary Readings; Malcolm X: Struggle for Human Rights, Social Memory: Hadith Transmission Network 610-1505. Şentürk’s works have been translated to Arabic, Japanese and Spanish.

We encourage you to register for all of the lectures of the sereis in order to get a complete understanding of the subject. In order to attend all seven lectures, you need to register for each of those lectures individually. The lectures will be held on Zoom and in a semi-academic format. There will be presentations by the lecturer. The lecture will take roughly around 45 minutes and it’ll be followed by Q&A and Comment section. Non-academics and academics from all disciplines are welcome to attend. The lecture will be recorded and shared with all of those who register to our WhatsApp group.

You can join our WhatsApp group for more updates: http://bit.ly/3nY4SEG

Please note that the webinars will be recorded. Some parts of the recordings will be uploaded online and publicly disseminated in both audio-visual and transcript format. Those who do not want to be captured in the recordings or transcripts should turn their webcams and microphones off.