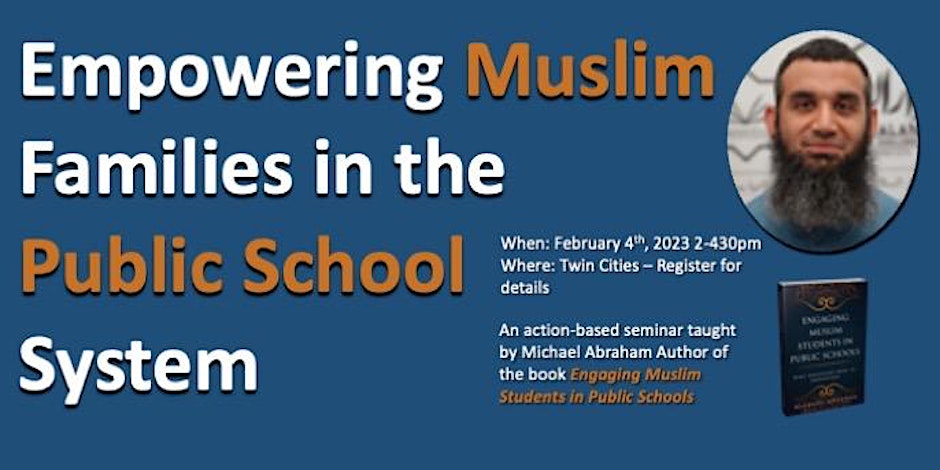 The American public school system is originally designed to be one of local influence first. The structure, culture and professional trends of public schools and districts create numerous avenues for parents to influence and direct the education of their children and the school community. The school system is actually dependent on the influence. However, communities and parents that assert themselves, and are educated upon the opportunities that exist within public education to advocate, having outsized influence on schools, even if they represent only a small contingent of families and students.

The greatest untapped resource of social power and influence that Muslims have in American society is its youthful population. The majority of Muslims in America are K through 12 age people who attend public schools. In the Twin Cities alone, several districts have seen their Muslim population of students increase dramatically over the past 20 years, in some cases increasing from less than one percent to nearly 25 or 30% of their student populations. There are several elementary schools throughout the Twin Cities and in other spots in Minnesota that had less than a handful of Muslim students at the turn of the century, and now have Muslim students make up nearly half of their population.

These numbers are only projected to increase over the next two decades as well. Public schools in the Twin Cities are dependent on the attendance of Muslim families and children. If Muslim families took their children out of the schools tomorrow, these districts would be facing a budgetary crisis.

So it is not just an opportunity, but really a responsibility, upon Muslim parents and community members to advocate for their kids, and to educate public schools about their desires for their children as a Muslim community.

This seminar will teach Muslim parents and community members…

– how to advocate on the ground in public schools. Attendees will gain knowledge about the current climate and trends in public schools that have created conditions that have actually made educators very open minded to learning about Islam, and wanting to be eager to respect and draw on the values of the Muslim community.

– about various avenues of communication with local public schools and districts that are available to parents and that accommodate different comfort levels of public communication.

– how to refer local schools and districts to quality resources in a professional manner that educate educators about Islam and religions every day interplay in a Muslim’s life as it relates to being a child to attend public school.

– how to conduct ongoing evaluation of a school or district as a parent or community group, that can assert authority to apply pressure when necessary on schools and districts to be accommodating and respectful of Muslim children and families. Resources will also given to this effect.

– about problems that are pervasive in public schools that are less spoken about, and often swept under the rug and kept unknown to parents and families, but that are at the core of the ever declining academic achievement rates in public schools especially for students of color. This seminar will show why advocacy from Muslim parents is actually key to turning these trends around.

– Upcoming law changes in Minnesota that will mandate sex education in all Elementary schools and the important role of parent advocacy in keeping these programs culturally-sensitive to the Muslim community.

The teacher of this seminar is Mr. Michael Abraham, public school teacher of 13 years and author of the book Engaging Muslim Students in Public Schools and creator of the educator training program of the same name that has been taken by over 2000 educators country-wide.

Who should attend: Muslim parents and community members in Minnesota.

Rregistration is free. Donation is requested. All donations will be used towards reach out and offering professional development to public schools about Engaging Muslim Students in Public Schools and providing youth activities for the Muslim community of Minnesota.