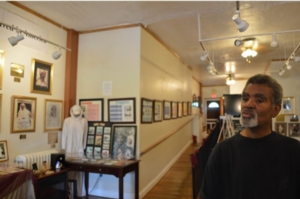 Through pictures and one-of-a-kind photographs, Brother Abdul-Rahim Muhammad, Director of the New Africa Center, shares overlooked histories of enslaved African Muslims, from early America through the Re-construction era and up to the present day. Participants will learn about enslaved African Muslim scholars from Abdul-Rahman Sori, the Prince Among Slaves to Imam W. D. Muhammad, son of the Nation of Islam leader Elijah Muhammad, who assumed leadership of the movement after his father’s death and transformed it into an Al-Islam proper movement.

Early movements like the 1960s Dar-Islam Movement and many more, emphasized self-determination, economic independence, nationalist politics, and the importance of developing a Black identity. The worldview shared by many movements in the African American community was that community members of all denominations could live together in peace and work toward common a goal despite their theological differences.

Abdul Rahim Muhammad was raised in West Philly and is a graduate of Overbrook High and Community College of Philadelphia. He was an assistant Minister for Muhammad Temple #12 C in West Philly in the early 1970s. In 1975 after the passing of the Hon. Elijah Muhammad, he accepted his son Imam W. D. Mohammed as his new leader and teacher and evolved to practicing Al‐Islam proper. In 2001, he completed the Hajj pilgrimage to Mecca in Saudi Arabia. Abdul Rahim Muhammad is a recognized leader. He is the founder and executive director of the Islamic Cultural Preservation and Information Council, and the New Africa Center/ Muslim American Museum & Archive. As a multicultural education consultant, he designs and implements workshops for K‐12 educators and has educated hundreds of students and other educators on Islamic history, culture, and beliefs, as part of ICPIC’s Multi‐Cultural Education program.

The lecture will be held both in-person and virtual.

Click here to register for the virtual Zoom lecture.

The Lecture Series is made possible by In the Path of Islam Project brought to you by The Free Library of Philadelphia and by The Building Bridges Program of the Doris Duke Foundation for Islamic Art. For more information on future programming go to freelibrary.org/pathofislam