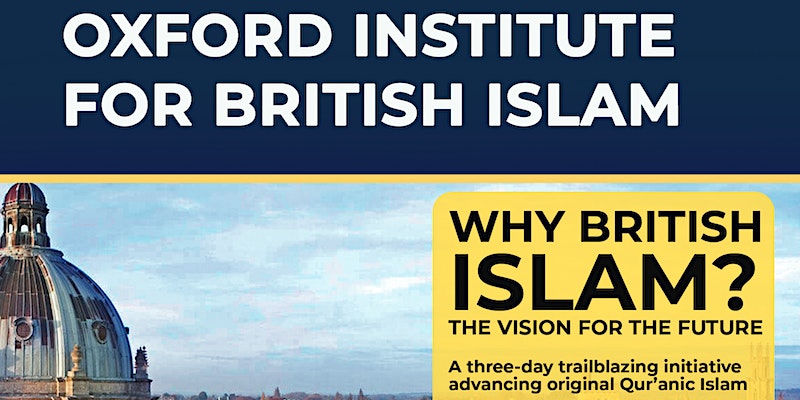 In its inaugural conference featuring a host of internationally-renowned speakers, the Oxford Institute for British Islam (OIBI) will present delegates the opportunity to hear from prominent scholars, and a unique chance to network with a global community of progressive-minded thinkers on Islam congregating in Oxford over three days.

OIBI is a pioneering scholarly initiative to promote a Qur’an-centric Islam that is firmly rooted in and relevant to the United Kingdom. It will actively advance a progressive and pristine pluralism benefitting Britain as well the Muslim community. It seeks to foster an authentic British Islam that is inclusive, integrated and ‘indigenous’, not regressive, ritualistic and reactionary. This erudite, egalitarian and enlightened faith champions fearless academic investigation as well as intrepid intellectual analysis that facilitates mutual understanding, philosophical tolerance and interfaith dialogue.

We invite you (or interested colleagues) to attend the inaugural conference of this ground-breaking, non-government-funded academic endeavour, to hear the keynote speakers, to meet with the principal founders of this trailblazing institute, and to network and learn from other like-minded attendees.

What to expect from the conference

Watch this space for more specific programme details to be released in the coming weeks.

Paigham Mustafa is an independent Scottish author and researcher who has extensively studied Islam’s foundational text for the past three decades. The fruits of his pioneering labour is the recent publication of his groundbreaking translation and commentary entitled: The Qur’an: God’s Message To Mankind. As an independent editor and bold publisher, his trailblazing Qur’an-centric perspectives have antagonised the orthodox Muslim clergy. This resulted in a written, still extant, fatwāh (religious ruling) issued against him in 2001 by the Glasgow Central Mosque. This edict was endorsed by numerous mosques and a multitude of prominent clerics. Undeterred by this ecclesiastical backlash, Paigham has persisted with his principled opposition to contrived Islamic theology by focussing exclusively on the pristine and original teachings of the Holy Qur’an.

Elham Manea is a writer and activist working at the University of Zurich. Her scholarly expertise focuses on shariah law, feminism, and human rights. She is a vocal advocate of the separation of state and religion in Muslim society and is a fearless champion for free speech, civil, and minority rights in Islam.

Edip Yuksel is an American-Turkish-Kurdish author, philosopher, inventor and progressive activist, who spent over four years in prisons in the 1980s for promoting a Sunni revolution in Turkey. In 1986, he experienced a paradigm change, leading him to reject his Sunni religion. Through the second volume of his book, Interesting Questions, he publicly rejected his best-selling books which promoted Sunni theocracy. He was rejected by his father, a prominent Sunni scholar, and was excommunicated. He immigrated to the USA in 1989 to escape from religious and political oppression. He parted ways from his comrades, including Tayyip Erdogan and Ahmed Davudoglu, who have been leading Turkish politics for over a decade. Multiple fatwas declared him heretic and apostate, making him a target for assassination. In 1989, he was sponsored for immigration to the USA by Rashad Khalifa and worked together in Masjid Tucson until his mentor’s assassination in 1990.

Jacqueline Woodman is a senior NHS Consultant Obstetrician and Gynaecologist and professor at Warwick University Medical School. She is a prominent Unitarian Christian promoting closer Muslim-Christian relations by writing and pioneering innovative interfaith initiatives in the UK.

Steven Greer is Professor of Human Rights at the University of Bristol Law School and was OIBI’s first Visiting Research Fellow. He has been published extensively and is acknowledged particularly as an expert in the roots of terrorism, and in counter-terrorism legislation.

Yasmin Alibhai-Brown came to the UK in 1972 from Uganda after completing her undergraduate degree at Makerere University where she passed with an exceptional first-class degree in English. She was awarded a scholarship to pursue post-graduate studies at Oxford where she obtained an M.Phil degree in literature in1975.

Now a journalist, she has written for The Guardian, Observer, The New York Times, Time Magazine, Newsweek, The Evening Standard, The Mail and other newspapers and was a weekly columnist on The Independent for eighteen years. She was the first regular columnist of colour on a national newspaper in the UK, the first female Muslim too. For someone of this background, politically on the left and a committed anti-racist, to find a voice and space in the mainstream media has been challenging and rewarding. She is also a respected pundit, radio and television broadcaster and appears on key political and cultural programmes. She writes a weekly column for I newspaper and for other newspapers including the Sunday Times and Mail on Sunday.

Taj Hargey is a forward-looking retired professor specialising in Islamic history, Muslim theology, and Qur’anic hermeneutics. After holding academic appointments in America, Sudan, South Africa, and Britain, he is today the main driving force behind OIBI.

Usama Hasan is a British astronomer and a Fellow of the Royal Astronomical Society. He is a former lecturer at Middlesex University, and a senior researcher in Islamic Studies. His unrivalled knowledge of, and recognised scholarship in, Islam has propelled him from a conservative to a moderate Muslim.

Conference fee and how to pay

Use this Eventbrite page to register for the conference, and choose many delegates will be in your group if you are coming with others. There is no cost to pay at this Eventbrite registration stage.

After that, OIBI will contact you with instructions on how to pay the conference fee, and confirm your place(s) and booking(s).

The conference fee is £250.00 per delegate and is inclusive of a room for 3 days, and all meals over 3 days. Delegates will be staying on the same estate as the conference building.

OIBI is an independent charity registered in England and Wales (number 1179049) which contracts with St John’s College for the use of facilities and has no formal connection with the University of Oxford.