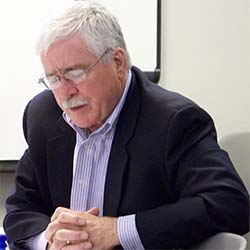 This is a hybrid event.

Register here to attend by Zoom.

Join ISITA for a talk by Charles Stewart (professor emeritus of history, the University of Illinois at Urbana-Champaign).

Ten years ago, Charles Stewart and Bruce Hall published a paper* outlining a “Core Curriculum” they argued was common to teaching and learning across Muslim communities in West Africa. This talks revisit that article using a sample of manuscripts from West African manuscript libraries that is nearly three times larger (43,000 manuscripts) than the original one. Its findings: (1) nearly all the works and authors originally cited as the core of teaching in West Africa are confirmed, and (2) the larger sample expands that core of most-commonly found texts to 204 authors and 323 works. These texts make up about thirty percent of all authored manuscripts accessible through the West African Arabic Manuscript Database, and, arguably, across West Africa’s Arabic manuscript culture. Twenty percent of those works were written by West African scholars. In addition to providing a template for writing an intellectual history, this compilation of literary authority documents the emergence of an autonomous Arabic culture in the nineteenth century in West Africa.

Charles Stewart is a professor emeritus of history at the University of Illinois and served as ISITA’s director of programming from 2014-16. An expert on the history of Islam in Mauritania and Arabic written traditions in Arabic in the broader West African region, Stewart compiled volume V in the “Arabic Literature of Africa Series,” titled The Writings of Mauritania and Western Sahara (Brill, 2015). This two-volume annotated bibliography contains entries on 10,000 manuscripts written during the past 350 years by 1,900 authors. Stewart is the creator of the first computer-based cataloging system for Arabic manuscripts in West Africa accessible online as the West African Arabic Manuscript Database.