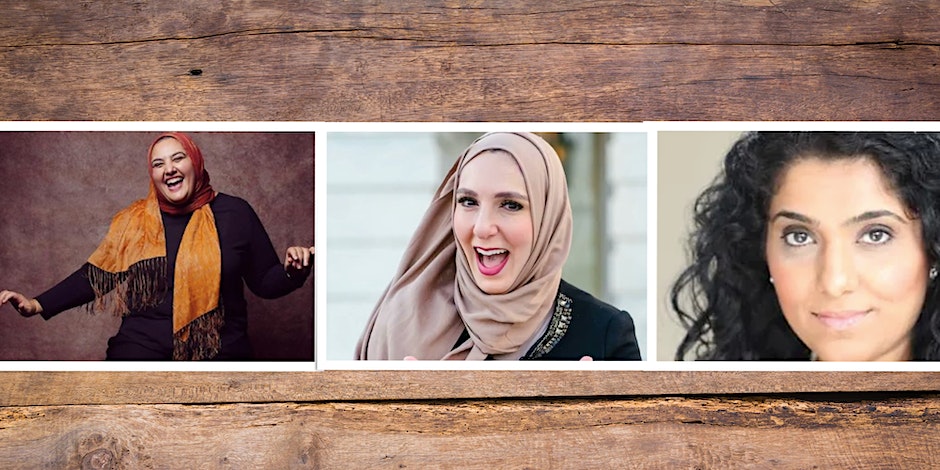 Muslim-American women employing humor to challenge the deeply-rooted assumptions about appearances and beliefs that shape how they have been represented.

Iman Zawahry is one of the first hijabi American-Muslim filmmakers in the nation.  She has worked on numerous films that have played at over 100 venues worldwide. She’s an Emmy award winner, Princess Grace Award recipient, a Lincoln Center Artist Academy Fellow, and Sundance Momentum Fellow.  Iman works to amplify the underrepresented female voice and frequently consults and speaks across the nation on Muslims in Film. Her debut film, Americanish, is currently touring the festival circuit and has won twenty five awards, including best director and best film. She is currently faculty of film production at the University of Florida.

Yasmin Elhady is an attorney and comedian. You can find her on TikTok. She’s performed all over DC, including The Kennedy Center, touring nationally and internationally in the UK. Her alter ego is “Yasguru,” a hyper active relationship advisor with silly videos on YouTube & IG.

Aizzah Fatima is an award-winning actor, filmmaker, comedian, and ex-Google engineer. She has been featured on NPR, The Guardian, Woman’s Hour (BBC), The Wall Street Journal, Newsweek, Time Out, The New York Times, and The Huffington Post. Her feature film Americanish world premiered at CAAMFest in 2021 and won the audience award. The film has won 20 awards at festivals including Best Lead Actress, Best Narrative, Best Director, and several audience awards. She has previously produced with James Franco’s company Rabbit Bandini Productions. Her TV pilot script Muslim Girls DTF: Discuss Their Faith world premiered at SeriesFest in 2022, and won the Best Comedy Writer and the Caz Matthews Fund awards.