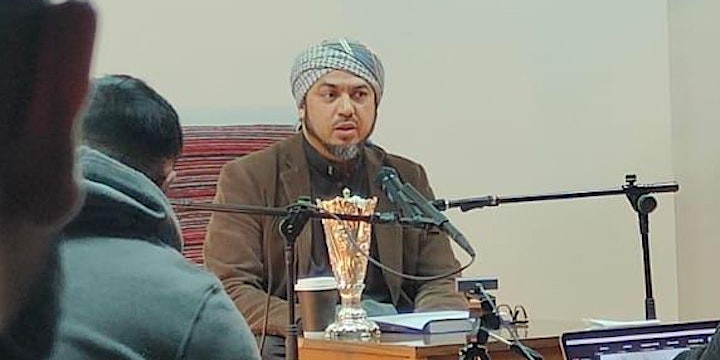 Prophetic Footsteps: An intricate two-year Sirah Programme traversing through the life events of the final Messenger of God ﷺ

After a busy and stressful working week, join us on Friday nights to delight in the divinely blessed study of the Prophetic Sirah. Shaykh Sayyid Sa’ad Al Attas will take us on a two year spiritual journey through the life of the Messenger of Allah ﷺ, his Blessed birth, childhood, revelation and establishment of Islam. Study the Sirah like never before at the feet of one of the off-spring of the Messenger ﷺ

Strengthen your faith, your knowledge and connection to Allah and his final Messenger and understand more about the greatest man to have ever walked this earth and the message he was sent with by Allah.

Free 2 year programme. Open to all.

Shaykh Sayyid Sa’ad al-’Attas, is a South African Yemeni Scholar and is a descendant of the Prophet Muhammad ﷺ.

He graduated from the Shari’a Institute run by the Tahdib wa Ta’lim endowment in Damscus, Syria. He was in the four year accelerated program. His studies there included the following: Arabic, Ulum-ul-Quran, Usul al-Tafsir, Hadith, Aqidah, Fiqh (Shafi’i and some comparitive, Usul al-Fiqh, Sira (fiqh al-Sira, Sirat of the Khulafa al-Rashideen), Mantiqu and Khitaba.

Some of the more important books read during that time include:

Outside of this institute, Shaykh Sa’ad concentrated on Shafi’i fiqh. He read with Shaykh Hussayn Darawish for three years. During that time, he completed Zakariya al-Ansari’s Tuhfat al-Tulab with most of al-Sharqawi’s marginal notes. He also completed nearly the first third of the same authors’s Fath al-Wahhab with additional notes from al-Bujayrami’s marginal notes. While doing this, he also read al-Shirazi’s al-Tanbih with al-Sayuti’s commentary, Sharh al-Yaqut al-Nafis, portions of al-Sayuti’s al-Ashbah wa al-Natha’ir, I’yanat al-Talibin, and others.

Shaykh Sa’ad is a senior lecturer at Bradford Muslim College, teaching on our Diploma and Alimiyyah programmes as well as leading courses on other sciences throughout the week.