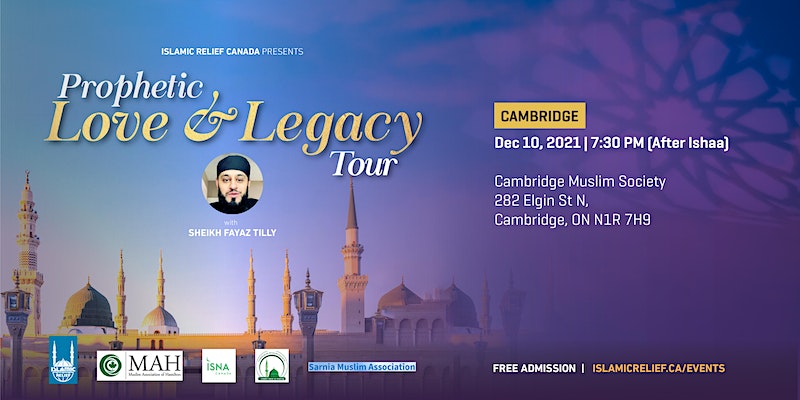 Description:
join us for an inspiring lecture about our beloved Prophet Muhammad ﷺ

Islamic Relief Canada is honored to be hosting the esteemed Sheikh Fayaz Tilly in Cambridge.

Join us on Dec 10 for an inspiring lecture by Sheikh Fayaz Tilly at Cambridge Muslim Society, where he will talk about our beloved Prophet Muhammad ﷺ’s love and legacy.

*Covid safety measures will be in effect.

He graduated from the Al-Madania Islamic Seminary in Buffalo, New York where he graduated with distinction. He was a recipient of a gold medal along with his colleagues for Interfaith work by the World Interfaith Harmony Week, awarded by King Abdullah II in 2017 and continues to serve various communities across Canada and the United States and has great interest and experience in collaborating and building bridges with different faith/spiritual and philosophical traditions promoting inclusivity, and religious pluralism.

He also serves as an instructor after founding IlmIntensive in 2007, enjoys skiing, bike riding, and has a keen interest in youth-oriented activities and community development. He lives in Southern Calgary with his family.