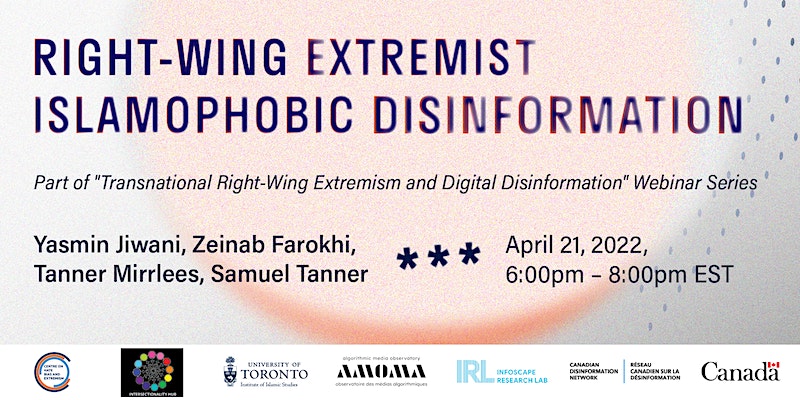 Description:
This panel focuses on right-wing extremism and contemporary Islamophobia.

This panel focuses on right-wing extremism and contemporary Islamophobia and probes how far Right actors use the Internet and social media platforms to perpetuate Islamophobic digital discourse. Panelists examine the emotional and rhetorical tactics used by right-wing extremists to spread Islamophobia across platforms and scrutinize how algorithms and bots work to amplify and intensify the flow of hateful and harmful misinformation about Muslims in society.

The global rise of right-wing extremist movements, parties, and politicians has been accompanied by research on the roles that the Internet and social media platforms may play in both supporting and contesting this harmful, hateful, and even terroristic political formation. Over the past few years, numerous scholars across disciplines have shown how the Internet and new and emerging digital media technologies provide right-wing extremists with a significant means for promoting their ideologies, circulating disinformation and propaganda, and interacting with and recruiting potential followers. Using a transnational and interdisciplinary lens, the “Transnational Right-Wing Extremism and Digital Disinformation” webinar series brings together scholars from across Canada to share their research on how right-wing extremists based in Canada and around the world use and exploit the affordances of social media platforms to advance their worldview.

Yasmin Jiwani is a full professor in the Department of Communication Studies, and a Concordia University Research Chair in Intersectionality, Violence, and Resistance. Her research interests focus on a critical interrogation of the discursive ways in which racist sexism is conceptualized and ideologically utilized in popular discourse. The particular sites which she has examined include media reportage of violence against Indigenous and racialized immigrant women, representations of Indigenous and Muslim youth in the popular press, as well as discourses of resistance articulated by marginalized groups in film and other popular media. Her most recent project is centered on cyber-memorials and virtual graveyards as reflections of the vernacular. Here, her analysis attends to race, gender, and belonging as expressed in the narratives posted on these sites. She is the author of Discourses of Denial: Race, Gender and Violence, and co-editor of Girlhood, Redefining the Limits, and Faces of Violence in the Lives of Girls.

Zeinab Farokhi is a doctoral candidate at the Women & Gender Studies Institute and Diaspora and Transnational Studies, University of Toronto. She received her M.A in Women and Gender Studies, from the University of Toronto, an M.A in Sociology from Osmania University, India, and B.A in History from Isfahan University, Iran. Her research interests include cyberfeminism, transnational feminism, and diasporic studies. Her current doctoral work compares the usage of Twitter by Islamophobic right-wing extremists in India, Canada, and the US, focusing on anti-Muslim rhetoric in Hindu nationalist/white nationalist discourse.

Tanner Mirrlees is an Associate Professor in the Communication and Digital Media Studies program in the Faculty of Social Science and Humanities at Ontario Tech University Mirrlees is a steering committee member of the Centre on Hate, Bias and Extremism (CHBE), and their current research examines the far-Right, the Internet and digital media platforms. Mirrlees is the author of Hearts and Mines: The US Empire’s Cultural Industry (UBC Press, 2016), Global Entertainment Media: Between Cultural Imperialism and Cultural Globalization (Routledge, 2013), co-author of EdTech Inc.: Selling, Automating and Globalizing Higher Education in the Digital Age (Routledge, 2019), and co-editor of Media Imperialism: Continuity and Change (Rowman & Littlefield, 2019), The Television Reader (Oxford University Press, 2012) and Media, Technology, and the Culture of Militarism (Democratic Communique, 2014).

Samuel Tanner is an Assistant Professor in the School of Criminology at the Université de Montréal. His current research interests focus on transnational policing, release of war and security issues that accompany them, and in particular the role and participation of civilian police – CIVPOL – in international peace operations. After obtaining his PhD at the School of Criminology at the Université de Montréal, researching the participation of armed groups in the context of mass violence that occurred in the former Yugoslavia in 2008, Samuel Tanner began a postdoctoral fellow at the Center for International Studies, Massachusetts Institute of Technology. As an extension of his thesis, his postdoctoral research focused on a comparative analysis between Rwanda and the former Yugoslavia, particularly the ways in which gangs were involved in mass violence in these two geographic contexts.