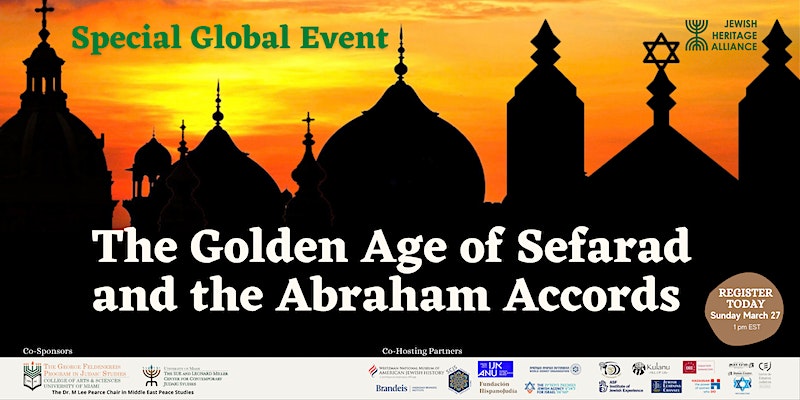 Description:
“The Golden Age of Sefarad and the Abraham Accords” How Muslims, Jews, and Christians Created a Culture of Tolerance

On March 27, 2022, Jewish Heritage Alliance, our co-sponsors, and co-hosting partners will present “The Golden Age of Sefarad and the Abraham Accords”, a global online event that celebrates and connects the growing rapprochement between Israel and Arab countries taking place today, with the medieval Golden Age of Spain, highlighting the timeless benefits of peaceful tolerance and coexistence between Jews, Muslims, and Christians.

The original connection between Sefarad and the United Arab Emirates dates back nearly 1,000 years to Benjamin of Tudela, a Jewish explorer whose 12th century travels throughout the Jewish World (during the lifetime of Maimonides), including a visit to Ras al-Khaimah, one of the 7 current cities of the United Arab Emirates. He documented the existence of a small Jewish community at that time. While much has changed in these intervening centuries, much unquestionably remains the same in our own time.

In September 2020, a historic milestone was achieved when agreements were signed at the White House between the State of Israel, the Kingdom of Bahrain, and the United Arab Emirates, collectively known as the “Abraham Accords.” These agreements have been recognized as a significant step in normalizing relations between the Jewish State and its Arab neighbors, following on peace treaties with the Arab Republic of Egypt (1979) and the Hashemite Kingdom of Jordan (1994). The Abraham Accords have uniquely accelerated and embraced the concepts of peace, tolerance, and collaboration, as seen through robust diplomatic and cultural progress.

By connecting the past to the present and inspiring hope for the future, this webinar seeks to showcase the lasting benefits when religions build bridges rather than divisiveness. While interfaith coexistence and a shared culture of tolerance are not easy to achieve and maintain, the enduring legacy of the Golden Age lives on as a model for the Abrahamic Faiths in the 21st century.

Jewish Heritage Alliance (JHA) will deliver an inspiring Special Global Event highlighting the benefits of peaceful coexistence by connecting the achievements of Spain’s Golden Age with today’s Abrahamic Accords. We are grateful to our gracious guests that will make this event unique and special.

Here is a sample of the guests we have invited:

Dr. Isaac Amon – Descendant of Moses Amon, Jewish physician to Ottoman Sultan Suleiman the Magnificent. He is an attorney and counselor at law who is Director of Academic Research & Program Development at Jewish Heritage Alliance.

Rabbi Dr. Elie Abadie – Our Guest of Honor is the Senior Rabbi of the Jewish Council of the Emirates and Rabbi of the Association of Gulf Jewish Communities (AGJC). He comes from a long and distinguished rabbinical lineage dating back to fifteenth-century Spain and Provence. He directly connects the past and the present.

Ms. Fleur Hassan-Nahoum – Deputy Mayor of Jerusalem in charge of foreign relations, international economic development, and tourism. She is also Co-Founder of the UAE-Israel Business Council and the Gulf-Israel Women’s Forum. Born in London and raised in Gibraltar, she immigrated to Israel in 2001.

His Excellency Dr. Ali Rashid Al Nuaimi – As a prominent advocate of Global Peace, Tolerance, and Coexistence, he serves as the first Chairman of the International Steering Board of Hedayah, The International Center of Excellence for Countering Violent Extremism based in Abu Dhabi. He also founded and currently Chairs the World Council of Muslim Communities and was the first Secretary-General of the Muslim Council of Elders.

His Excellency Ahmed Obaid Al Mansoori – Founder of the “Crossroads of Civilizations Museum” in Dubai, which aims to promote multiculturalism, tolerance, and positive co-existence. It is the first museum accessible in the Hebrew language in the city and includes in its collection historical Jewish artifacts of the Middle East.

His Excellency Bishop Paul Hinder – O.F.M Cap. – Vicar Apostolic of the Apostolic Vicariate of Southern Arabia and Apostolic Administrator of the Vicariate of Northern Arabia. He holds many roles, including as consultor to the Pontifical Council for Interreligious Dialogue.

His Excellency Dr. Shaikh Khalid bin Khalifa Al Khalifa, Chairman of the Board of Trustees of The King Hamad Global Centre for Peaceful Coexistence in Bahrain. He also serves as Vice-Chairman of the Board of Trustees and Executive Director of Isa Cultural Centre. For his efforts in promoting cultural diversity and interreligious dialogue, he received the 2018 Mediterranean Prize for Culture and Peace.

His Excellency Gilad Erdan – Permanent Representative of Israel to the United Nations since 2020. He has previously served as a member of the Knesset, Minister of Strategic Affairs, Minister of Public Security, and Ambassador to the United States.

There are several important surprise guests that we will announce in the coming days. Stay tuned!