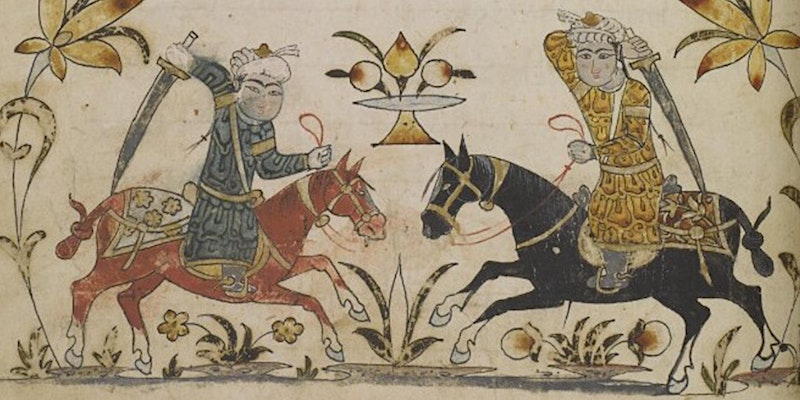 Description:
Two-day short course on warfare in Bilad al-Sham and Egypt during the Medieval and Modern Ages.

Military architecture through recent archaeological excavations and arms and armour in the Royal Armouries Collections.

The course presents Muslim material cultures in a very specific context: warfare in the Middle East and Egypt during the Medieval and Modern Ages. War played a very important role in Muslim cultures and through the study of military architecture and arms and amour, the course will explore art and architecture in a war context to explain identity and changes in Muslim societies from the Arab conquest to the eve of the colonial period. Most of the arms and armour which will be presented during the course are from the Royal Armouries’ collections, from some of its most well-known treasures to objects rarely made available for public view.

This course links Muslim and Christian cultures through war and peace, diplomacy and social changes. All aspects of Muslim societies will be studied through the lens of military architecture, arms, and armour. Following this short course, participants will be able to:

• Differentiate between the role of warfare in Muslim societies in the Middle and Modern Ages;

• Learn about the importance of cultural exchanges between the East and West;

• Study the impact of the past to understand the relations between Muslims and Christians in today’s society;

• Receive a methodological background on archaeology, history and art history;

• Recognise the different types of Muslim fortifications by geographical area and period;

• Distinguish between different types of Muslim arms and armour by geographical area and period.

Stephane Pradines is an archaeologist, Professor of Islamic art and architecture at the Aga Khan University’s Institute for the Study of Muslim Civilisations in London. He is a specialist of trade and Islamisation in the Indian Ocean, from the Swahili coast to the Maldives. He is also a specialist of warfare in medieval Africa. He was the director of the excavations of the Walls of Cairo in Egypt from 2000 to 2016. He is now in charge of the excavations of the fort of Lahore in Pakistan. From 2008 to 2015, Stephane Pradines, Abbes Zouache and Mathieu Eychenne were co-directors of an international research programme on War in the Medieval Middle East organised by the French Institute of Archaeology in Cairo (IFAO) and the French Institute in Near East, Beirut-Damascus (IFPO). Professor Pradines has published many articles and books on military architecture, fortifications, arms and armour from the Fatimid to the late Ottoman period.

The Aga Khan University’s Institute for the Study of Muslim Civilisations and Royal Armouries Museum, UK.

*The course will be delivered via Zoom. Readings and further details will be provided later upon registration.